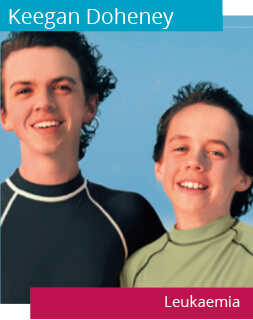 When Keegan Doheney was two years old he was diagnosed with leukaemia. Thankfully, doctors were able to get his cancer into remission. While his family remained optimistic about the future they were aware that there was the possibility of a relapse. When Keegan’s mother Wendy became pregnant again she decided to bank the baby’s cord blood. Speaking about the decision to bank her son Keldan’s cord blood Wendy said, “Keegan was in great shape, went through all his chemo and came out healthy. So I never thought in my wildest dreams that we would need it.”

When Keegan was in kindergarten Wendy instinctively knew there was something wrong. “He relapsed with leukaemia when he was five and a half and that turned your odds into a 50% chance of survival”, said Wendy. The doctors decided that a transplant was the right option to treat Keegan’s leukaemia. Thankfully, Keldan was a perfect match to donate stem cells to Keegan for the transplant. Because Wendy had decided to store Keldan’s cord blood the stem cells were in storage ready to be used.

Leukaemia is a cancer of the blood. When intensive chemotherapy is used to destroy the cancer cells it can also damage the cells which are used to replace healthy blood cells. A stem cell transplant helps the patient to rebuild a healthy immune system after chemotherapy.

“I’ve been healthy ever since I was five and a half because of my transplant I got from my little brother and his cord blood. So basically my little brother saved my life”, said Keegan speaking about the transplant. “If it weren’t for him, I wouldn’t be here.”

In 2013 Cells4Life released whole cord blood for the treatment of leukaemia. The patient and donor were siblings.