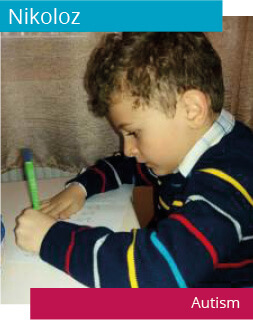 Until recently, eight-year-old Nikoloz from Georgia struggled with the symptoms of severe childhood autism. Unable to speak and prone to aggressive outbursts, he was diagnosed with the condition at the tender age of just two.

Now, he can communicate with short sentences, commands a wide vocabulary, and attends a regular school with minimal adjustments to his curriculum.

According to his parents, Nikoloz’s transformation is down to a series of experimental stem cell treatments administered between 2016 and 2017, where doctors injected his umbilical cord blood directly into the spinal cord.

Before Nikoloz was born, his parents had never expected they would need to use his cord blood sample. They banked his stem cells for peace of mind, after a recommendation by their obstetrician.

After his diagnosis, however, they discovered a clinical study run by the Mardaleishvili Centre in Tbilisi, Georgia that used cord blood to treat autistic children.

Soon after, they enrolled him as a patient and their cord blood bank released his sample.

Over the course of 18 months, he was one of several patients to receive intrathecal injections, with the size of an individual’s injection dependent on the size of their overall sample.

As Nikoloz’s family had stored cord blood in four separate samples, he was able to receive a total of three intrathecal injections six months apart.

Intrathecal injections involve passing a needle between spinal vertebrae, in order to deliver stem cells directly into the cerebrospinal fluid that circulates around the spinal cord and brain.

The stem cells are able to flow freely through the body and reach the areas damaged by autism disorder.

In the trial, doctors found that injections caused a stronger paracrine effect, which means they induced other cells to change and correct their behaviour.

Incredibly, results indicated that as little as 68 million nucleated cells per injection had a positive effect on patients.

Three injections would therefore require a minimum of just over 200 million nucleated cells, which is much less than the hundreds of millions – or even billions – of cells that are often collected in umbilical cord blood samples.

Ultimately, Nikoloz’s story offers real hope that umbilical cord stem cells can help people with serious autism symptoms to live a fuller life, and better communicate with their family and friends – sometimes for the first time.

In 2017, Cells4Life released whole cord blood for the treatment of autism. We have released two more samples in 2018 for an autism clinical trial at Duke University, North Carolina.