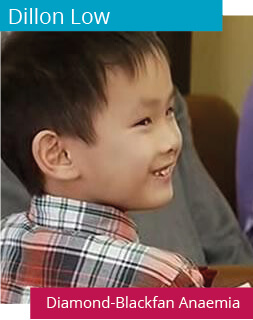 It was clear immediately after his birth that something wasn’t right with Dillon Low. The delivery room was quiet. Within 10 minutes his parents were informed that he needed a blood transfusion. After a series of tests it was confirmed that Dillon had Diamond-Blackfan anaemia.[1]

Diamond-Blackfan anaemia is a rare, inherited blood disorder caused by the bone marrow’s failure to create red blood cells.[2] Red blood cells play an important role in the body as they carry oxygen. A lack of these cells can cause fatigue and pale skin along with other symptoms.

Dillon would spend a large amount of time at hospital undergoing blood tests and blood transfusions. Unfortunately, Dillon continued to get weaker with each passing week making him increasingly irritable. “That’s just how life was”, said Dillon’s mum speaking about life with Diamond-Blackfan anaemia.

Dillon’s parents, Alex and Carol, were informed about cord blood banking by their doctor. When Carol gave birth to her second son, Brody, his cord blood was harvested and processed. Brody’s cord blood stem cells were given to Dillon via an infusion to treat his blood condition. Dillon no longer suffers from fatigue and he now has lots of energy. He is a healthy child.

“This is a rare occasion where the patient is born with a life threatening disorder and he no longer has that; it doesn’t appear on his medical charts at all.” said Carol. “This has definitely shed light on the benefits of cord blood and the miracles that can happen.”

Diamond-Blackfan anaemia is a very rare blood disorder with only around 125 cases in the UK [3].

In 2012 Cells4Life released whole cord blood for the treatment of a blood disorder. The patient and donor were siblings.