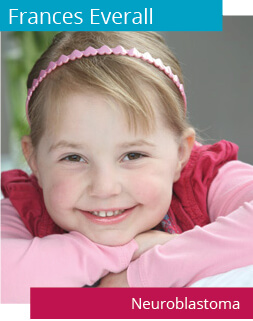 Frances Everall was born in 2002 when cord blood banking was relatively new. However, her parents saw the value it could hold and decided to store her cord blood, although they never expected to need it. When Frances was four years old she was diagnosed with stage 4 neuroblastoma. It was a devastating diagnosis. One of the early options put forward to her parents was to take her home to die as the cancer was so advanced.

Neuroblastoma is a rare type of childhood cancer which predominantly affects children under the age of five years old. Neuroblastoma originates in nerve cells which are in early development (neuroblasts) and causes these cells to grow into tumours.[1] The family decided palliative care was not an option for them at this stage and decided to pursue treatment knowing that they had at least given Frances the best chance possible to fight the cancer. She underwent six cycles of radiotherapy and chemotherapy and eight hours of surgery to remove a tumour caused by her neuroblastoma, followed by a bone marrow transplant. To further boost her immune system after chemotherapy Frances received her cord blood.

In 2008 Frances went into remission.

“There haven’t been many neuroblastoma stage 4 children in New Zealand who have survived. She has survived and she’s defied the medical predictions and really the only thing that’s different in her treatment to the other children who’ve died is the cord blood. Privately I’ve heard that medical staff consider Frances to be a miracle.” said the family’s spokeswoman, Kristina Andersen.[3]

“I was happy that I didn’t die and could stay with my family.”[3]

Around six out of ten children with neuroblastoma are cured.[4]