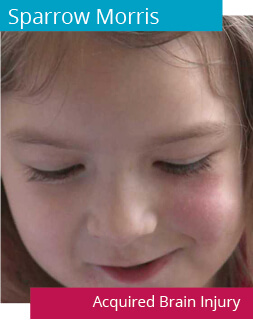 When Tonya Morris was pregnant with her fifth child she learned about the benefits of cord blood banking for the first time. Knowing the potential benefits it could hold for her family she decided it was the right decision for her baby and family. Tonya gave birth to a healthy little girl named Sparrow, but when Sparrow was just 20 months old the unthinkable happened. Sparrow fell into a pool of water and almost drowned, she was without a pulse for an estimated 47 minutes. The doctors prepared her family for the worst; her brain had been so starved of oxygen she was unlikely to survive.

Thankfully Sparrow did survive. However, she was left in a vegetative state, unable to sit and needed to be fed through a tube. Over the next 12 months Sparrow received speech therapy, physiotherapy and occupational therapy several times a day. With the help of these therapies Sparrow began making progress. A year after the accident Sparrow had her stem cells re-infused at Duke University for a clinical trial procedure. The results were evident almost immediately.

“The next day Sparrow was initiating talking to us, which she wasn’t doing [before]. She was talking and wanting to play and smiling all day long”.

Tonya said excitedly. Sparrow began hitting milestones much more rapidly and even began to reach age appropriate milestones. Today, Sparrow no longer attends therapy sessions. Reflecting on the experience Tonya said, “It was amazing that we banked Sparrow’s cord blood, not thinking that we would ever see it be used but we used it for Sparrow and it was there for her and only because it was her own cord blood we got to use it.” For Tonya Morris and her family banking cord blood was priceless.

In 2012 Cells4Life released whole blood samples, sufficient for two treatments, to Duke University for the treatment of a cerebral injury. The patient has cord blood remaining in storage with Cells4Life for further treatments.

In 2015 Cells4Life released 10ml of whole blood to Duke University for the treatment of an acquired brain injury. The majority of the patient’s cord blood remains in storage at Cells4Life.

“Every 30 minutes, a child or young person will acquire a brain injury. This could be the result of an accident, an illness such as meningitis or encephalitis, a poisoning, a stroke or a brain tumour.” – Child Brain Injuries Trust