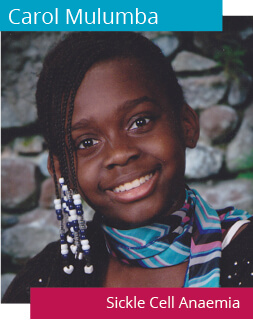 In the UK those with African and Caribbean heritage are most commonly affected by sickle cell anaemia. [1]

The only cure for sickle cell anaemia is a stem cell transplant. Carol’s parents were advised to store the cord blood of any future children they should have. Siblings have a 25% chance of being a perfect match for transplant. A study showed that survival rates are improved when using sibling cord blood compared to unrelated cord blood. Additionally, there is a vast shortage of stem cell donors from black and minority communities. Carol’s best chance of finding a stem cell match would be within the family. Unfortunately Carol’s condition had deteriorated so much by the time she was six years old that doctors advised her parents that she was in need of a stem cell transplant. Fortunately Carol’s parents had banked the cord blood of her younger brother Mark and he was a perfect match for Carol. After undergoing chemotherapy Carol was infused with her brother’s stem cells. Speaking about the transplant Carol said,

In 2012 Cells4Life released whole cord blood for the treatment of a blood disorder. The patient and donor were siblings.