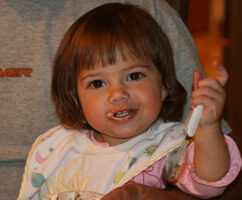 When Chloe Levine was 9-months-old, her parents noticed she couldn’t hold her bottle with her right hand. That wasn’t her only developmental setback. Chloe, of Pinetop, Arizona, was unable to raise both hands above her head, and she could not crawl. At 12 months, a CAT scan showed a portion of the left side of Chloe’s brain had not developed and contained fluid. Seeking answers, Chloe’s parents, Ryan and Jenny Levine took their daughter to a neurologist who diagnosed the toddler with right-side hemiplegic cerebral palsy.

“The cerebral palsy had only affected the right side of her body,” Jenny Levine said. “The neurologist told us we were looking at 17, 18 years of therapy.” That was when the Levine’s heard about an experimental procedure at Duke University in North Carolina where children with cerebral palsy were infused with their own cord blood stem cells in an effort to heal and repair damaged brain tissue. The Levine’s remembered they had banked Chloe’s cord blood when she was born.

“It was a miracle,” Alvarez said Monday on FOX & Friends. “I congratulate you for banking her cord blood. Stem cells are a new field of medicine and they certainly can rejuvenate the tissue.” Two months ago, Chloe, 2, received an infusion of her own stem cells and her progress is remarkable, said her father, Ryan Levine. “Her therapist said she’s made a 50 percent recovery,” he said. “She can walk, run, and do sign language with her right hand.”

Cerebral Palsy is caused by abnormalities in the parts of the brain that control muscle movements. By capturing umbilical cord blood stem cells the tissue to treat the condition can be rejuvenated.