Home » 30 years of cord blood banking: then and now

30 years of cord blood banking: then and now 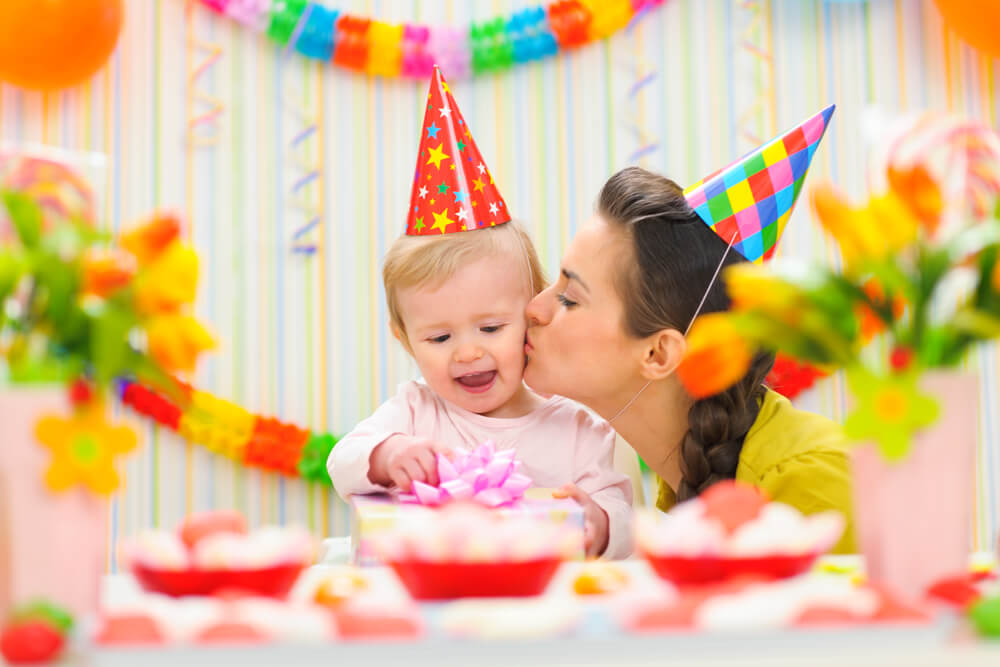 In 1988, an international team of doctors came together to perform the first ever cord blood transplant on a five-year-old boy. On the 30th anniversary of his surgery, Cells4Life takes a look at the past, present and future of stem cell science.

30 years ago, regenerative medicine was in its nascent stages. The possibility of re-growing organs or treating diseases and disorders like stroke and cancer was the stuff of science fiction. 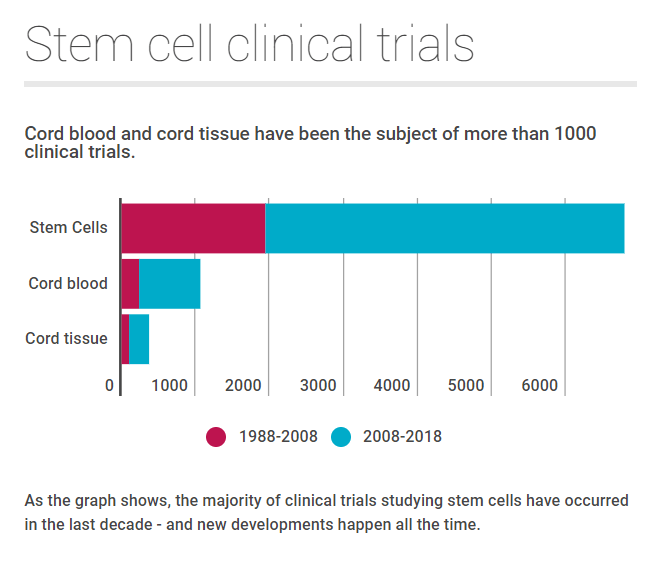 Today, these powerful cells – often called ‘nature’s building blocks’ – are widely regarded as the future of medicine. The umbilical cord, previously discarded as a waste product, is viewed as the key to unlocking this potential.

How did cord blood banking begin?

The idea of cord blood banking was born in 1982, when a scientist called Edward A. Boyse suggested that the umbilical cord was being wasted after birth.

Within a few years, he had teamed with Dr Judy Bard and Professor Hal Broxmeyer to form Biocyte, a company that would explore its use for transplantation and cell therapy.

At the time, most stem cell therapies relied on bone marrow but Biocyte sought to prove that umbilical cord blood was a worthy substitute.

They funded Broxmeyer at the Indiana University School of Medicine with a two-year grant, which involved studying the biology and cryopreservation of umbilical cord blood stem cells.

Dr Joanne Kurtzberg, working under Broxmeyer, investigated the use of the haematopoietic stem cells found in cord blood to treat a variety of conditions, and research soon showed that umbilical cord blood was a suitable source of blood-forming stem cells.

Why was Fanconi Anaemia the first disease to be treated with cord blood?

Encouraged by the results, the group of scientists chose Fanconi Anaemia as the first disease to treat with cord blood, because HLA-matched sibling donor bone marrow stem cells was already used in therapies for the condition.

They partnered with Arleen Auerbach from Rockefeller University in New York, who had found a way of diagnosing Fanconi Anaemia before birth, and Elaine Gluckman from Hospital Saint Louis in Paris, who was a leading doctor for patients with Fanconi Anaemia.

Who was the first person to receive a cord blood transplant? What did it involve?

Doctors chose Matthew Farrow, a five-year-old boy recently diagnosed with Fanconi Anaemia, for the first transplant. His mother was pregnant with a second child at the time, which made the family the perfect choice for cord blood collection and transplantation.

When Matthew’s sister was born, the blood was extracted from her umbilical cord and flown by Broxmeyer to New York, where it was subsequently frozen.

Six months later, it was used in Paris for the transplant – proving conclusively that umbilical cord blood could be banked, frozen and thawed with positive results.

Crucially too, the cord blood transplant completely cured Matthew Farrow of Fanconi Anaemia. Patients with the disease are expected to live only until their teenage years but Matthew has now reached 35 years of age.

For many years, cord blood was primarily used to treat haematopoietic disorders, such as leukaemia and anaemia. This is because cord blood contains haematopoietic (blood forming) stem cells, which can be used to reconstitute the immune system. 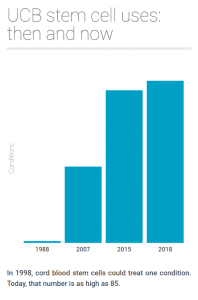 However, today, perhaps the most exciting emerging use for cord blood stem cells is regenerative medicine.

Even at this early stage, the most probable use for privately banked cord blood is regenerative therapy.  In fact, in 2015, 47% of private releases were used for a regenerative treatment, and this proportion has increased hugely in the last 3 years.

As an example, umbilical cord blood is now being routinely used at Duke University in the US to treat brain conditions like cerebral palsy and autism.  The chance of a child in the UK suffering from a degree of cerebral palsy is 1 in 500 and this narrows to 1 in 100 for any level of autism.  On this basis, the chances of using cord blood for one of these indications is relatively high.

Stem cells and other cell populations found in the umbilical cord are also being investigated for the treatment of a huge range of conditions that will affect all of us in some way as we age.  These include arthritis, heart disease, stroke, diabetes and many others.  In 2007, it was forecast that 1 in 3 people alive today would require a regenerative therapy; given the speed at which this field is progressing, this probability will only increase. Nowadays, the most probable use of privately banked cord blood is regenerative therapy.

Stem cell science is rapidly advancing and in the past two years alone, we have released five cord blood samples – almost quadruple our average between 2012 and 2016. 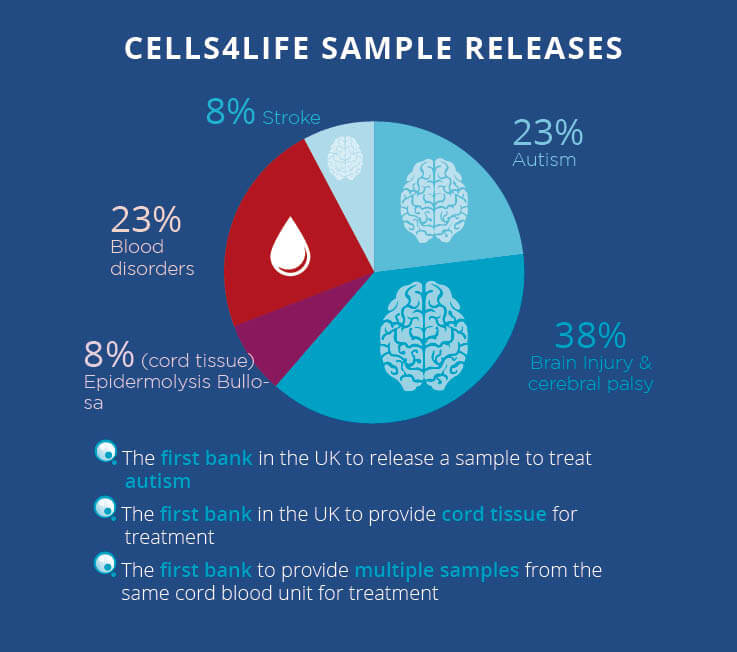 There are also a number of promising clinical trials…

Scientists have treated sufferers of MS by wiping out their immune system with chemotherapy and rebuilding it with stem cell transplants. After three years, the stem cell transplant failed in just 6% of patients compared to 60% in the control group.

Scientists at Duke have also been using cord blood to treat children with cerebral palsy. Results so far have shown that the stem cells have improved neurological development and motor skills in patients.

Scientists are expanding their work from using cord blood to treat brain injuries to also include adult stroke. Patients will receive unmatched cord blood transfusions over the course of 3-10 days and monitored for a year to assess safety and efficacy.