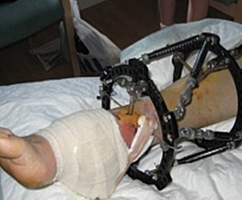 Stem cell skin treatment for Kent man: a Gillingham man who faced losing his leg in a climbing accident saw it saved thanks to a revolutionary ‘glue’ made from stem cells.

Andrew Kent’s right leg was broken in five places by a falling boulder while he was climbing with his son in the Langdale Pikes in the Lake District in April. The 53-year-old was rushed to hospital in Carlisle, where the broken bones were pinned back together in three operations.

But his leg was still in a bad condition and the wound became seriously infected. He was transferred to the Spire Alexandra Hospital in Chatham, where Anan Shetty, orthopaedic surgeon, performed the stem cell treatment: the first in Britain.

It involved removing stem cells from the bone marrow in Mr Kent’s hip. The cells were then mixed with a collagen gel known as Cartfill.

This formed a paste that was smeared into the fractures. His leg was then placed in a metal cage, gently squeezing the broken bones back together.

Cells4Life is the only laboratory that is open fully 24 hours a day, 365 days a year to process quickly.