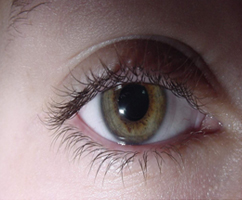 A man who was partially blinded after intervening in a fight has had his vision restored by a new stem-cell therapy.

Russell Turnbull, 38, lost most of the sight from his right eye in 1994 when he was sprayed in the face with ammonia while trying to break up an altercation on a bus in Newcastle upon Tyne. The chemical burnt his cornea, leaving him with cloudy vision, pain on every blink and extreme sensitivity to light.

He has now become one of the first people to benefit from a treatment developed at the North East England Stem Cell Institute in Newcastle, in which stem cells from his good eye were used to repair his damaged one.

All eight of the partially sighted patients taking part in the first trial of the therapy have reported improved vision, reduced eye pain and a better quality of life. If the success is repeated in a larger trial of 25 patients, started thanks to support from the Medical Research Council, the procedure could be used to restore the sight of thousands of people with diseased or damaged corneas.

“This has transformed my life, my eye is almost as good as it was before the accident,” he said. “I’m working, I can go jet-skiing again, and I also ride horses. I have my life back thanks to the operation.”
Timesonline.com 23rd December 2009

Damaged eye sight is common. One example is limbal stem cell deficiency (LSCD), in which the retina becomes cloudy and develops a rough surface that causes pain when blinking and sensitivity to light. Scientists can generate replacement stem cells that are spread on to a human amniotic membrane. Then the damaged corneal tissue is then surgically removed and replaced with the stem-cell grafts.

In the know? A large number of our customers are medical professionals, Consultants and Doctors, who recognize the long term benefits.